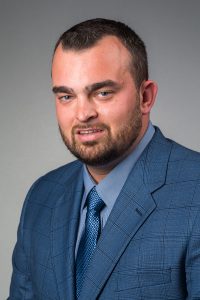 Bryan Hodgson begins his second season on the UB men’s basketball coaching staff, helping guide the Bulls to the NCAA Tournament and the 2015-16 MAC Title. Hodgson leads the UB recruiting efforts and was responsible for the addition of junior college transfers Blake Hamilton, Willie Conner, and David Kadiri.

Hamilton was named to the All-MAC Third team this past year, while also hitting the game-winning shot in the MAC Championship game vs. Akron. Conner, a transfer from Odessa Community College, was named the MAC Tournament Most Valuable Player and also named to the league’s All-Defensive Team.

Hodgson came to UB after spending the last two years at Midland College, where he helped lead the team to a six-win turnaround during the 2014-15 season. He helped manage all aspects of the recruitment for Midland and conducted individual skill development workouts and in-season team practice sessions.

A Western New York native, Hodgson served as an assistant coach from 2010 through 2013 at Jamestown Community College, where he also helped turn around a program upon his arrival. He coached 14 players who received scholarships to four-year schools after their graduation from JCC, coaching nine all-region players during his time.

Hodgson played two seasons at Jamestown Community College, serving as a two-year captain, before heading to the Fredonia State, where he finished his education and served as an assistant coach. He is the founder of the I-90 Elite AAU Basketball Team, assisting a number of players earning college scholarships.

Hodgson also has served as a counselor at a number of prestigious camps, including Duke, Maryland, West Virginia, Syracuse, Michigan State, amongst others. He has worked the Duke camp for the last six years.